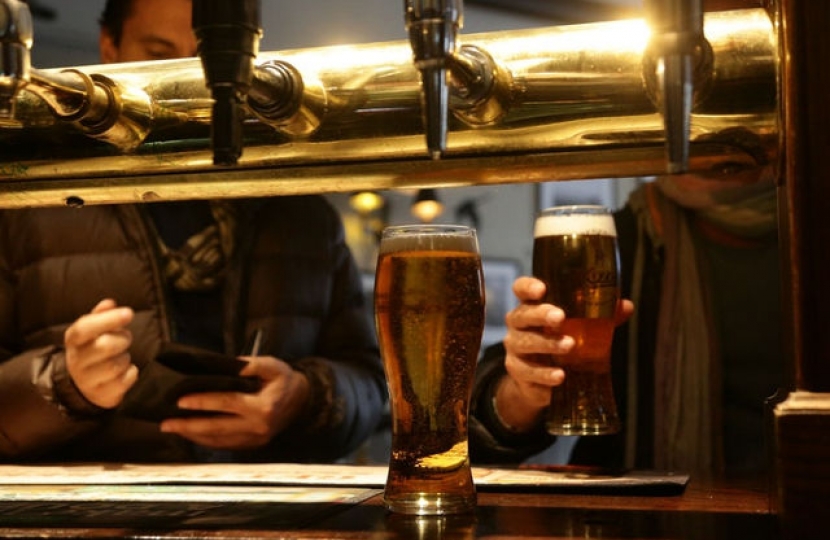 Giles Watling, MP for Clacton, has once again written to the Chancellor of the Exchequer, Rt Hon Philip Hammond MP, to request that Beer Duty is cut in the Budget later this year.

Ahead of the 2018 Budget, Giles supported the Long Live the Local Campaign to cut Beer Duty, which would have been the first reduction in living memory. However, the Chancellor decided otherwise and maintained the Beer Duty freeze that has been in place for several years. Giles also wrote to the Chancellor following the 2018 Budget to express his disappointment at that decision, which he believed would do little to protect our pubs, given that they are already struggling financially. And according to recent figures, fourteen pubs are closing for good each week and Giles believes that the slow demise of this sector is a real tragedy.

That is why Giles has written to the Chancellor to ask again that Beer Duty is cut in the 2019 Budget, the preparations for which will be starting soon. In that letter, Giles made the case for either an across the board Beer Duty cut, or a potential differentiation of Beer Duty rates to benefit pubs over supermarkets – this approach would allow for lower Beer Duty rates in pubs, offset by higher rates in large off-trade retailers. Giles believes that either of these changes would help support small businesses, whilst protecting the community spirit and the responsible drinking promoted by pubs.

Speaking about his letter, which you can read below, Giles said:

“As I have said before, any pub closure is concerning and a real tragedy, especially when the majority of these are small local pubs, as I set out in my letter.

“For large retailers, sales of beer only forms part of their turnover, whereas for pubs and small off-trade retailers, alcohol sales can be everything – I know this is the case for businesses in the Clacton constituency.”

“Although, while I would welcome an across the board cut in Beer Duty, I recognise that there is a need to maintain our balanced approach to the public finances. As such, the differential rates of Beer Duty that I am proposing, will introduce a sustainable and progressive cut where it is needed most. I would also like to thank local CAMRA members for bringing this proposal to my attention.

“But, and however we choose to do it, Beer Duty in our pubs must be cut to revitalise these important community hubs, which do so much to promote: social interaction, a strong community spirit, responsible drinking, and enterprise on our high streets. And if we fail to act in a way that truly cuts costs for our pubs, then we are in real danger of losing all these potential benefits, and once they are lost, there is no guarantee that we can get them back!

“I hope, therefore, that the Chancellor seizes this opportunity, and I will be seeking a meeting with him to discuss this further. I will also seek a Parliamentary debate in the coming weeks on this matter.”