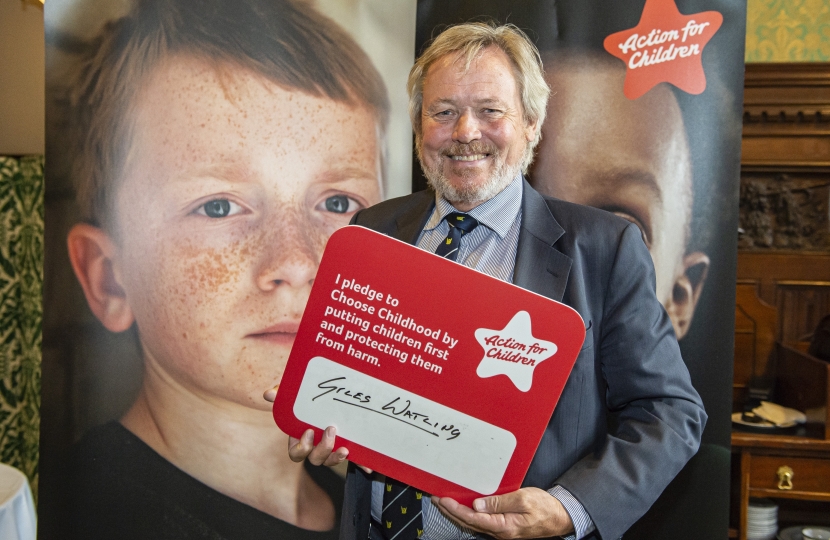 Giles Watling, MP for Clacton, joined young people and children’s services experts from leading charity, Action for Children, in Westminster to back their new campaign urging political leaders across the UK to prioritise children and put them at the heart of domestic agendas.

New polling from Action for Children, published to mark the charity’s 150th anniversary, has revealed that three generations of families fear childhoods are getting worse, with almost two-thirds of parents and grandparents saying that growing up in the UK today is worse than for the previous generation.

All three generations also said bullying is the biggest problem preventing a good childhood, with children having to deal with it both inside and outside school as well as online. At the same time, children, parents and grandparents each identified “safer streets and a lower risk of crime” as the key issue they wanted to change for children.

With young people around the UK facing unparalleled social pressures, the Clacton MP has backed the charity’s Choose Childhood campaign and pledged to put children first and protect them from harm.

“We want every child and young person, no matter where they are in the country, to have a safe and happy childhood with the foundations they need to thrive.

“But, far from being carefree, our research shows that children are buckling under the weight of unprecedented social pressures. Meanwhile, the vulnerable children we work with every day are facing traumas like domestic abuse and neglect, or struggling with their mental health. And all too often, they do so without the support they desperately need.

“It’s no wonder a quarter of young people think children today do not have a brighter future than their parents did when they were young. But with the support of MPs like Giles, Action for Children can protect children from harm and help make childhoods better.”

“It’s deeply saddening to learn that two-fifths of parents and grandparents think children do not have a brighter future than the previous generation. This is a troubling reflection on the experience of childhood today.

“Children should not have to worry about things like poverty and inequality, let alone Brexit. Childhood should be a time for happiness, not for despair.

“That’s why I’m pleased to be supporting Action for Children and their Choose Childhood campaign, and will be doing all that I can to prioritise children and make sure that young people across Clacton can have a safe and happy childhood.”