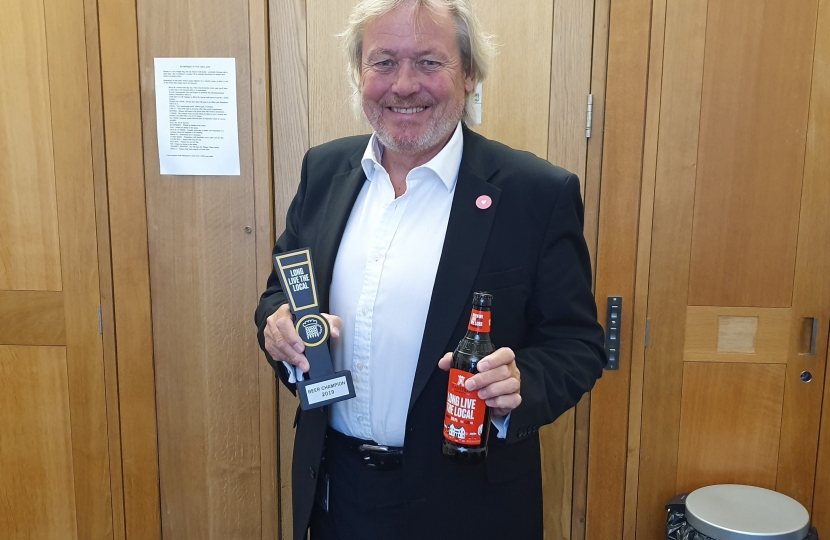 Giles Watling, MP for Clacton, has received an award in recognition of his support for the Long Live the Local campaign, and for his help in securing successive freezes in beer duty.

The award comes from the British Beer & Pub Association (BBPA) and recognises the role Giles has played in supporting Britain’s national drink since his election in 2017. As part of this support, Giles has campaigned for successive freezes in beer duty, which have secured thousands of jobs and millions of pounds worth of investment for the brewing and pubs sector.

Due to financial pressures, 11% of pubs are set to close over the next five years. This threatens the positive economic impact that the brewing and pub industry has in every part of the country, with every pub boosting its local economy by £100,000. In response, the Long Live the Local campaign seeks to prevent pub closures and is petitioning for a cut in beer duty in this year’s Budget. So far, 150,000 people have supported this petition, and this includes hundreds of signatories from the Clacton constituency.

“Beer duty and the closure of our pubs is something I have raised regularly in Parliament, and I am pleased that we have been able to secure beer duty freezes. Because we need to protect our pubs from rising costs, as any pub closure rips the heart out of its local community, whilst being counterproductive to Government work to tackle loneliness and alcohol abuse. There is also a clear negative impact on local economies and employment opportunities from closures. And let us not forget, 43% of jobs in this industry are held by young people.

“The UK currently has one of the highest duty rates in Europe and the average tax bill for a UK pub is £140,000. We can start to correct that with a cut in beer duty, which will take some of the pressure off our pubs and will, hopefully, slow the rate of closure. But we can also be more ambitious here and that is why I want to see a differential rate of beer duty implemented after Brexit to stop the supermarket undercutting the price of a pint in our local – the supermarket is as much to blame here as the taxman, but we cannot correct that disparity whilst being a member of the EU. So, there is clearly more to do and a significant cut in beer duty would be a positive start; that is why I back it!”

"This award recognises Giles' invaluable support the pub and Britain's historic brewing industry. I want to thank Giles for the work done in securing two beer duty freezes in this parliament, and for his support for the brewing and pub sector since the 2017 election."

Giles also joined BBPA and Long Live the Local at their Parliamentary event on 3rd September 2019.

And Giles hosted a debate on differential rates of beer duty on 25th June.