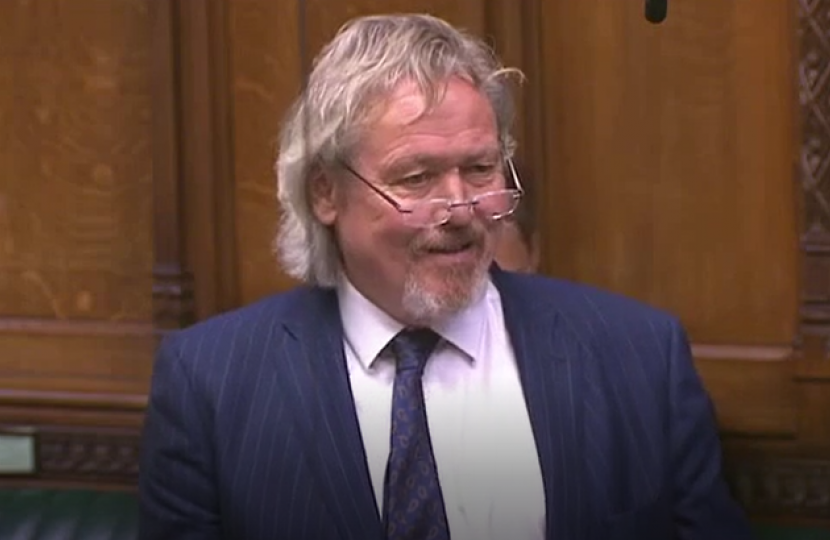 It is an honour to follow the hon. Member for Strangford (Jim Shannon), and I absolutely agree with him about the Union. The Union is important in relation not only to Northern Ireland, but to Scotland. I would like to reiterate the words of the late, great David Bowie, who said, “Scotland, don’t leave us. We love you. Stay with us.”

I would like to congratulate the hon. Member for Foyle (Colum Eastwood) on his maiden speech, getting it out of the way so early and with such aplomb—very good work there. I would also like to disagree with my hon. Friend the Member for Southend West (Sir David Amess), who said he did not like to campaign in the winter. I loved it. I knocked on many doors—I canvassed for all six weeks—and I got offered cups of tea everywhere I went. I would like now to apologise to some residents of the Clacton constituency that I could not have a cup of tea with them all. A man can only take so much tea while walking the streets.

Only yesterday, I had a chat with a friend who recently lost his seat on the Opposition Benches. He was very candid, and said that although the result of the election was not what he would have preferred, he is happy that the Government now have a serious majority and can finally get on with delivering an agenda without more fuss and delay—that was an ex-Labour MP, but I frequently found that attitude on the doorsteps in Clacton. People want us to get on with it and deliver on the promises made.

When walking in Clacton, I gained support from many previous Labour voters; there were people who had voted Labour all their lives, as had their parents and grandparents, yet this time they gave me their vote. I am deeply humbled and honoured by the confidence placed in me and, like the Prime Minister, I am acutely aware of the responsibilities placed on me by that support. ​We now have to earn it. I am delighted, once again, to have been elected to represent the glorious sunshine coast of Clacton, and I have strong support from my constituents for my work, and the work of this Conservative Government, who today laid out a comprehensive and progressive policy programme.

During the election, I stood on doorsteps in Clacton with a simple message: “We must get Brexit done and then focus on other vital priorities, including even more police, better healthcare and infrastructure improvements, not to mention education.” Predominantly, the response I got back was the same. People said, “Yes, those are our priorities too. I am so glad that somebody is finally listening.” We are not just listening, we are acting—indeed, we have already acted. In Clacton, more than 30 new police officers now operate locally, and I am proud that they were recruited after a campaign I led to increase the police precept in the area.

As we know, hundreds more officers—20,000 in total—have been promised for every policing area, and I understand that Essex Police has already started recruiting the first wave of new officers. I am delighted that a Bill will be introduced to increase policing powers and ensure that violent convicts are kept off the streets. We have had issues in Clacton and I know my constituents expect no less.

On healthcare, we have secured a change in management at four local surgeries where services were woefully substandard. I thank Ed Garrett, leader of the local clinical commissioning group, for his perseverance on that matter. It has been my priority to hold the management to account. We have done that, and residents will see an improvement in another key doorstep issue. The Government have provided nearly £15 million for an upgrade at Clacton Hospital, which is in addition to the £33.9 billion funding boost for the NHS by 2023-24. It is right to enshrine that key pledge into law, along with the other healthcare announcements in this programme.

Some £318 million has been set aside by the Government to fund two local infrastructure schemes, including a new railway station at Beaulieu, which has been a pinch-point on our rail lines and held up transport for the Clacton community. Clacton is just under 70 miles from the great conurbation of London, yet that journey takes the best part of one hour and 40 minutes. These days that is an outrage and it should be improved. Money will also be spent on the new link road between the A120 and the A133—my hon. Friend the Member for Harwich and North Essex (Sir Bernard Jenkin) will agree with me on this, because we worked hard to get funding to build that new road. The Conservative party manifesto pledges to spend £100 billion on additional infrastructure spending, which will go on roads and rail. That productive investment will repair and refurbish the fabric of our country, and generate greater growth in the long run.​

On the doorstep, I saw how popular our policies are and—at least in my local experience—that was one of the great differences in this election. We listened to, and will deliver for, the electorate we have, rather than the imaginary electorate championed by those on the Opposition Front Benches. We will deliver pragmatic and practical policies for those voters, whereas the Opposition take them for granted and promise the undeliverable. We will get Brexit done. We cannot continue to deny the Brexit result. We know that the Prime Minister has achieved a good deal that delivers on the result of the referendum and allows us to move on, and I for one will be happy to reach a place where we never have to hear the word “Brexit” again.

People know that this is a credible Government who will act on their demands, and in five years our record will speak for itself—post Brexit. That record of delivery starts with this Government programme, although of course there is more I want to do, including further improvements in animal welfare, a ban on dog and cat meat consumption in this country, making elder abuse a hate crime that carries a tougher sentence, and ensuring that school funding is spread evenly across the county of Essex.

We must care for those who protect us by increasing defence spending, and protect and promote our incredible “Theatre” offer, which does so much to inform, educate and promote the UK internationally. We should also introduce a differential rate of beer duty between pubs and supermarkets, after the B-word has been delivered. I will bother Ministers greatly about those matters in due course, but for now I recognise that this is a strong programme that gets Brexit done and delivers on our priorities, and I happily support it.