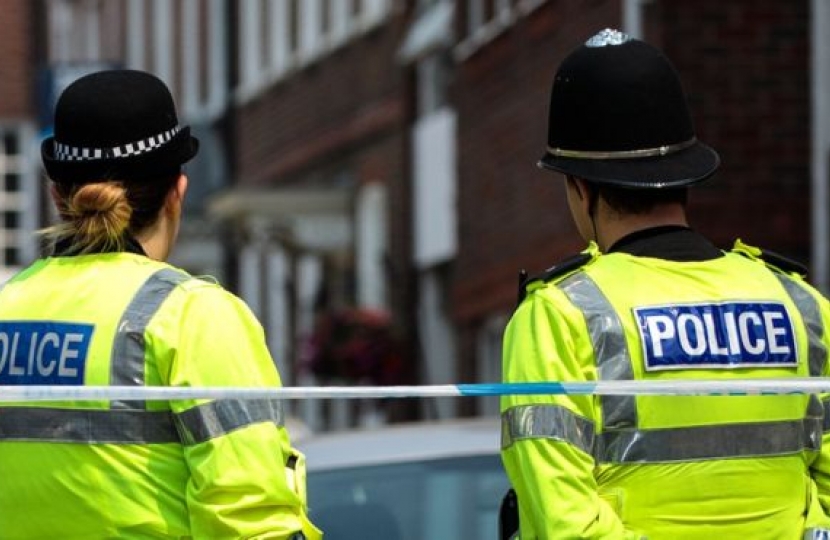 Giles Watling, MP for Clacton, has welcomed the decision by the Government to increase funding available to Police & Crime Commissioners (PFCCs) by up to £813m, if PFCCs use their precept flexibility fully.

In October, Giles coordinated a letter from all backbench Essex MPs to the Chancellor of the Exchequer. The letter asked that:

This provisional funding settlement meets both of those demands and demonstrates the Government’s commitment to ensuring our police have the resources they need. This settlement also builds on this year’s total increase in police funding of £460m, and this is made possible by the Government’s balanced approach to public finances – keeping debt falling so we can spend more on vital services like the police, not debt interest. The settlement includes:

For Essex specifically, this funding settlement will make £23m in new funding available for the local PFCC, Roger Hirst, and this includes a £2.9m grant to cover the cost of recent pension changes.

To ensure this investment is well spent, the Government will work with the police on four key areas next year to drive efficiency and effectiveness. Moreover, in the forthcoming Spending Review, the Government will be prepared to invest appropriately in police capacity, capability and support for a professional workforce. Giles will continue to lobby Ministers ahead of the spending review to ensure that police get adequate support.

Minister for Policing and the Fire Service, Nick Hurd, said:

“We recognise the police face significant financial pressures in the coming year. This settlement offers a substantial increase in funding for the whole police system to ensure forces recruit, meet local priorities and continue to improve efficiency to free up resources for the front line.”

"I welcome the announcement on police funding for 2019-2020 and appreciate the support from the Minister and the Treasury to mitigate the cost pressures faced by policing nationally. This extra support means that any money raised locally can be spent locally on policing in Essex.

"People know how stretched policing is. They want more officers and I believe are willing to pay more to get them. I recently ran a survey to test whether the public were willing to invest more in Essex Police. We had a strong response with over 71% of people willing to pay more and more than two thirds of these were willing to pay an additional £20 a year, or even more. Last year because of the extra money raised through the policing precept and efficiency savings achieved by Essex Police, we were able to recruit an extra 150 officers. These officers have been recruited, trained and are being deployed in communities over the next few weeks.

"The announcement today should mean we are able to do at least the same again, or more, next year. As we consider our position for next year, we need to ensure that any additional money raised is spent wisely and goes towards making a real difference, locally in our communities."

“Once again, just like last year, I am pleased that the Government has acted to make more funding available for local police services following my campaign. I am also pleased that additional grant funding has been provided to cover increases in pension costs – we already have twelve new police officers in Tendring, and this will allow for further investment in the future!”