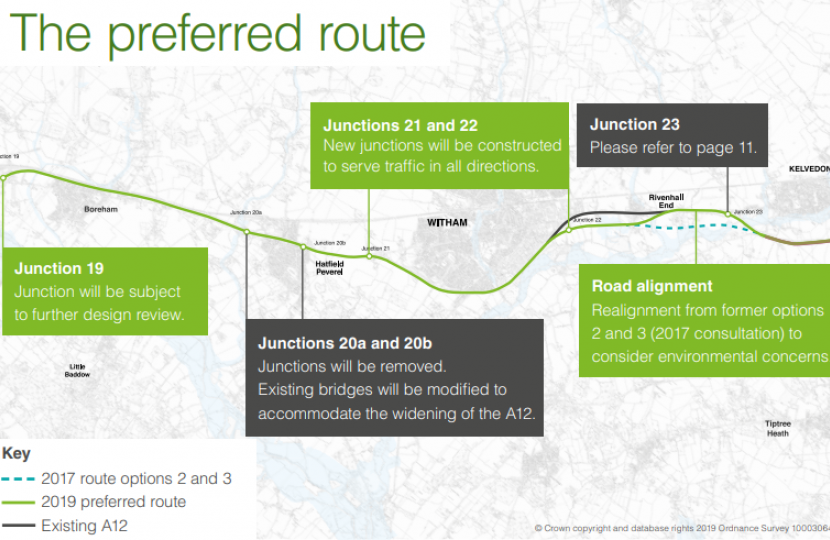 Giles Watling, MP for Clacton, has welcomed recent progress toward delivering the A12 widening scheme between Junctions 19 and 25, which will reduce congestion and accidents on the route.

On 21st October, the Department for Transport published two documents that take this scheme to the next stage of its development. This included a Preferred Route Announcement between Junctions 19 and 23, and public consultation on four new route options between Junctions 23 and 25. This consultation will be open for six weeks and the preferred route for the entire scheme will be announced next year, as this requires additional information that is not yet available.

Works are currently scheduled to start in 2023-24, with the scheme opening to traffic in 2027-28. When complete, the scheme will widen a 15-mile section of the road between Chelmsford and Marks Tey, and the Government considers that this upgrade will, among other things, support the smooth flow of traffic by providing greater resilience to cope with incidents, encourage economic growth by supporting planning, economic and housing growth in Essex and the surrounding region.

Highways England previously consulted on how best to upgrade this stretch of the A12. But plans were subsequently put forward for a proposed Colchester Braintree Borders Garden Community at Marks Tey, which had an impact on the suggested A12 route. Highways England believe it is important to ensure that the new road meets the future needs of the area and has since worked in partnership with the relevant local authorities to consider how the A12 could support the proposed housing growth.

More information on the scheme can be found here.

Stephen Elderkin, Highways England project lead for the A12, said:

“The A12 is a key route connecting the East of England to London. With the high levels of congestion, it’s a route that Highways England and the Government are committed to improving. Our proposed improvements will increase safety and average speeds, so that someone travelling on the A12 daily can expect to save over an hour of travel time each week.”

“I want the A12 to be as safe as possible for the 90,000 people who use it each day. That is why we are committed to modernising this major road, supporting growth in the region and improving journeys for all”

“I am pleased to see this much needed scheme take another step forward. It is important that the right long-term solution is found, not just for the Garden Communities, and the many homes that could be delivered there, but also for those who commute using this road every day. I know that many residents in the Clacton Constituency use the A12 to reach Chelmsford, Southend-on-Sea, London, and beyond. This upgrade, along with a new A120, a scheme that also continues to develop, will improve lives for those residents. I hope this scheme will be delivered as soon as possible.”