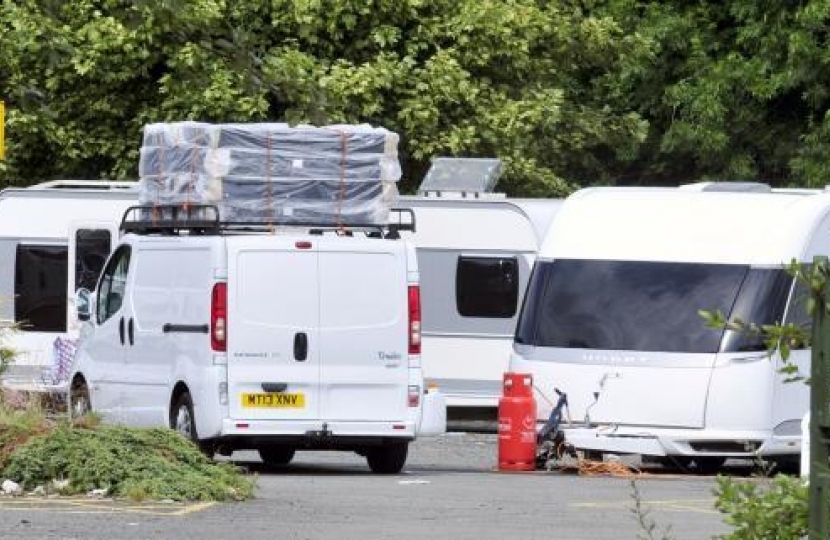 Giles Watling, MP for Clacton, has welcomed the support of Roger Hirst, Police, Fire and Crime Commissioner for Essex, in seeking a change in the law for how unauthorised encampments are dealt with.

Following a recent spate of unauthorised encampments in the Clacton constituency, Giles wrote to Mr Hirst to ask what more Essex Police can do in response, in order to keep residents safe. In his response, Mr Hirst said:

“One of my first actions as Commissioner was to bring together all the relevant groups who handle unauthorised encampments across Essex to establish an agreed approach. Like you, I believe that law abiding communities should not have to put up with illegal activity and I was frustrated by the inconsistent, and at times weak, response.

“As well as supporting the development of this shared approach the Chief Constable and I also established the Rural Engagement Team whose remit is to work with communities across Essex to tackle rural crime, including providing a robust and consistent approach to unauthorised encampments. This team was established in 2017 and the current Chief Constable and I announced last year that, because of the success of the team, we would be doubling its size.

“These two initiatives, the shared protocol and the establishment of the Rural Engagement Team, have resulted in a huge drop in unauthorised encampments across the county, from 365 in 2017 to 201 in 2019; in the current year there have been just 65. This is real progress and demonstrates the seriousness with which I and the Chief Constable approach the matter. While many encampments are peaceful and law abiding where this isn’t the case it is right that the Police use their powers to move people on and also identify and tackle any criminal activity that is happening. The team are working hard to get the message across that Essex is not the place to come and commit crime.”

Giles has previously supported changes to the law that would make deliberate trespass a criminal offence. During the 2019 General Election, the Government also promised to introduce this so called ‘Irish Option’, which would give police the power to arrest and seize caravans if travellers set up camp on public land. In his response, Mr Hirst also threw his support behind this proposal, saying:

“However, the police must still work within the existing legislation. While at the moment I am confident that Essex Police are using the powers they have to their full effect I no longer believe these powers are sufficient to deal with the unauthorised encampments in a way that the majority of the our communities would expect. During the recent Home Office consultations into the treatment of unauthorised encampments I spent a considerable amount of time listening to those in our communities who are most affected. Following this engagement, I submitted a strong response supporting the criminalisation of trespass (the ‘Irish Option’), as this change in law would simplify the current eviction process. It is my view that unless the police’s powers are significantly improved, and they are provided with the resources to implement these changes, the handling of these sites will fall short of the expectations of our communities. I would therefore urge you to strongly consider supporting this option in parliament whenever there is opportunity to do so.”

In terms of next steps, Giles will now write to the Home Secretary, Rt Hon Priti Patel MP, to express his continued support for this important change, and to ask that the necessary changes are introduced as soon as possible. All other Essex MPs will also be approached to co-sign this letter.

In response to the reply he received from Mr Hirst, Giles said:

“I am grateful to Roger for supporting this important change. For years we have seen too many unauthorised encampments in our area, and Tendring District Council do excellent work clearing up after these incursions. I must also recognise the work of Essex Police, who have worked hard to reduce the number of encampments.

“As I have said before, I know that more needs to be done to prevent encampments in our area and it is not right that local communities should have to deal with the costs, or the nuisance caused by this illegality. We promised in our last manifesto to tackle these encampments, and even during this difficult national moment we must work to bring in this change before Summer 2021.

“Progress has been made and the Government has consulted on this proposal to understand how best to introduce this change. I know that a response to that consultation is expected in the Autumn, and that is why I am writing to the Home Secretary to express upon her the need for an urgent resolution. I have no doubt that my colleagues from Essex, and Roger, will be happy to also put their name to that piece of correspondence.”