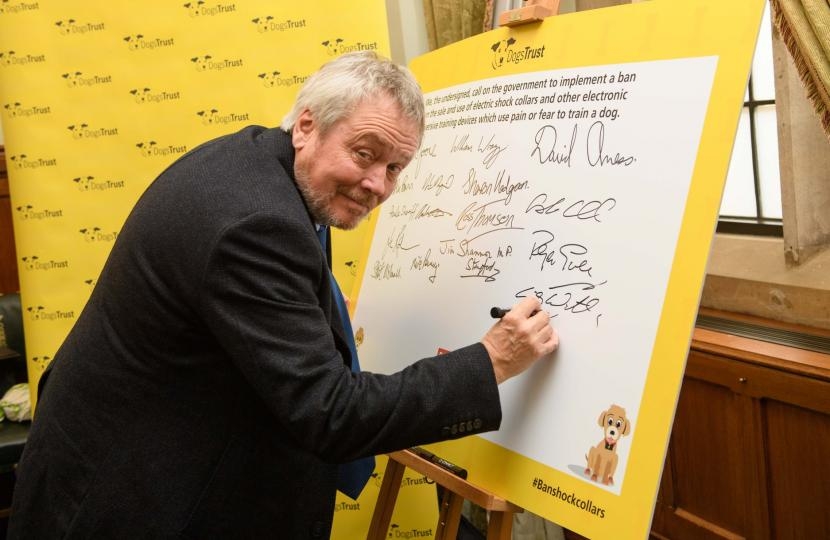 Giles Watling, Member of Parliament for Clacton, welcomes the Government’s proposal to ban the use of electronic training collars for cats and dogs.

The Department for Environment, Food and Rural Affairs (DEFRA) has proposed a ban on two types of e-collars for cats and dogs.  DEFRA is now consulting on these proposals, which will apply to hand held remote-controlled devices that stop unwanted behaviour by triggering an electronic pulse or other deterrent.

The consultation closes on 27th April 2018, and further information can be found here: https://consult.defra.gov.uk/animal-health-and-welfare/ban-on-electronic-training-collars-cats-and-dogs/

Giles has consistently demonstrated his opposition to these outdated and cruel training methods, and believes that there is no need for them to be used when there are so many positive training methods available.

Giles previously pledged his support for the Dogs Trust’s campaign to ban these devices, and contributed to a debate in Parliament on outlawing these devices on 14th March.

During that debate, Giles said:

“What we have is a sentient dog that is potentially living in fear, not knowing where the next shock is coming from. We must stop that cruelty as soon as we can. We must bring the ban forward and expand it, rather than just rolling on endlessly, given the time it takes to get through these things through Parliament.”

“I am pleased that Ministers have listened to my representations, and those of my colleagues and charitable organisations, to ban these cruel training methods. This is a hugely important issue for dog welfare and I would encourage local residents to engage with the ongoing consultation. I will continue to lobby Ministers to ensure that these unnecessary devices are outlawed as soon as possible.”