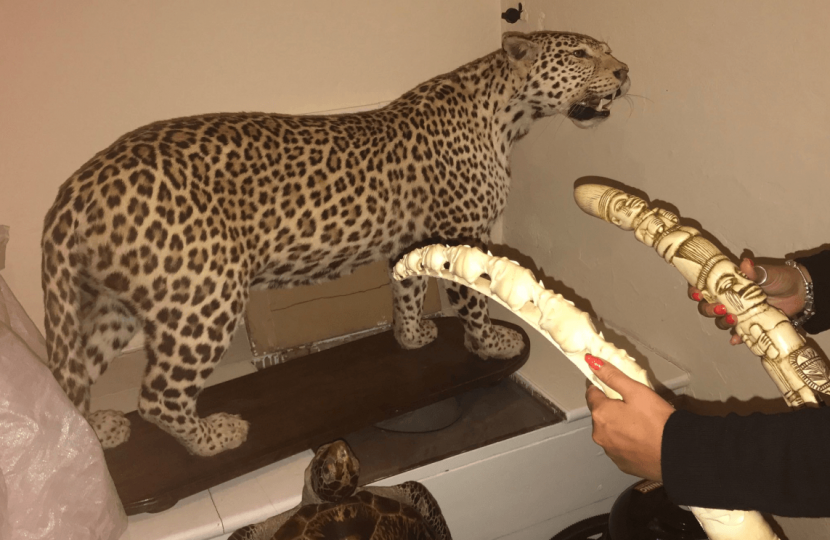 Giles Watling, MP for Clacton, has met PC Andy Long, a Wildlife Crime Officer from Essex Police, to find out more about the prevalence of wildlife crime in the county and what is being done to combat it.

At the meeting, which took place on 7th September, Giles heard how the type of wildlife crime varies across Essex. For example, in northern areas, including Tendring, Hare Coursing is far more common than it is in the south of the county. The north also tends to have more rural wildlife crimes, such as unlawful traps.

Five Police Officers currently work as part of the Essex Police Rural Engagement Team and deal directly with rural crime matters as well as matters.  In addition, six divisional Wildlife Crime Officers work across the county and provide advice on these matters to their colleagues. Essex Police also have two police volunteers who deal with Wildlife Crime.

At the meeting, Giles was also shown goods that have been seized by the police, which included: stuffed turtles, a mounted leopard, a monkey skull and several ivory pieces.

“The trade in animal products is illegal, and I was concerned to see just how many grotesque items had been seized from unscrupulous dealers. I would like to thank Andy for meeting with me and talking me through the efforts to tackle wildlife crime – this is clearly a serious issue and I am keen to do all I can support the police in their efforts to reduce wildlife crime.”