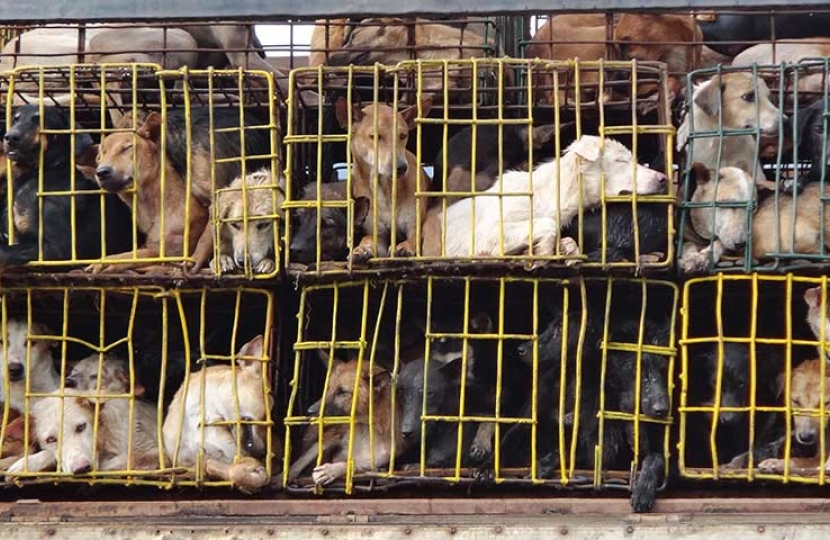 Giles Watling, MP for Clacton, has met with the Minister of State for Food and Animal Welfare, David Rutley MP, to discuss a possible ban on the consumption of dog and cat meat in the UK.

Currently, the private slaughtering of dogs and cats for private human consumption is still legal in the UK, and Giles believes that needs to change. That is why he has tabled an amendment to the Agriculture Bill, which will properly outlaw dog and cat meat consumption in the UK. This amendment has been supported by over 35 colleagues, from all of the political parties in Parliament.

Thirty million dogs and four million cats are still slaughtered every year for their meat around the world – 15,000 dogs and cats are killed during the ten-day Yulin Festival in China. These animals are often stolen and are housed in small, filthy cages with little food or water, as there is a strong (and erroneous) belief that their meat is tastier and contains better medicinal properties if they live through high levels of pain and stress whilst being killed. This results in horrendous suffering, with animals often boiled, skinned, or blow torched alive.

Giles asked a question of the Prime Minister, who reassured him that animal welfare is one of the top priorities of government and met with Minister Rutley on 19th February, to raise his further concerns and push for a proper ban in the UK, which he believes will send a powerful international signal of the UK’s moral opposition to these horrific practices – bans in the United States, Germany, Hong Kong, Singapore, Taiwan and Austria have had a similar effect. Following this meeting, the Minister committed to exploring what more can be done to address this matter, and Giles took part in a Westminster Hall debate on 21st February, where the Government reaffirmed that commitment.

“I grew up with animals of all sorts and am the proud owner of three fairly noisy but lovely dogs: Minnie, Humphrey, and Herbie. That personal experience ensures that animal welfare is always high on my agenda. As I said in the debate, I have no doubt that anyone who hears of these deplorable practices cannot help but feel disgust. These are our companions, they are not food and they need to be protected – both here and internationally.

“It is quite right that there are many important issues to focus on in Parliament at the moment, but we have the ability to multitask and we can introduce a comprehensive ban on consumption quickly. The UK is already a world leader in animal welfare, but we need to continue that trend. I believe a proper ban on consumption in the UK will help to protect these animals, not only here but around the world, and I am delighted that the Government will look into what more can be done.”