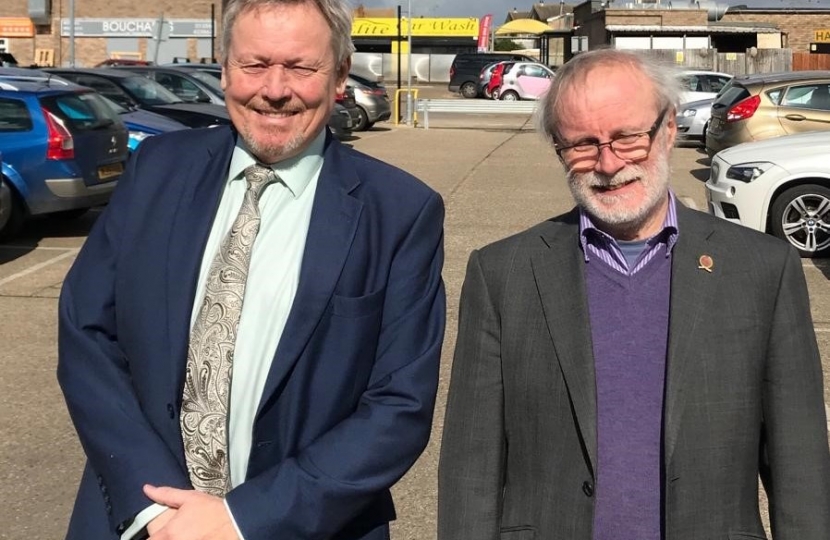 Giles Watling, MP for Clacton, has met with Cllr Richard Everett who was pivotal in bringing scam parking companies to the attention of Parliament.  They are both delighted to welcome the progress of the Parking (Code of Practice) Act, which has now received Royal Assent.

This Act will address parking scams, such as those seen locally in Clacton, and the code of practice will contain guidance to promote good practice in the operation and management of all private car parks, along with guidance for consumers about appeals against parking charges imposed in relation to the use of these facilities. The Act also provides for a levy on the parking industry to cover the costs of issuing, administering, and investigating whether persons have failed to act in accordance with the code of practice.

Giles has supported the Act at all stages during its passage and was recently told by Ministers that it could be implemented quickly, once a formal consultation has been completed. That consultation should be launched shortly, and can be found here: https://www.gov.uk/government/publications?publication_filter_option=consultations

Cllr Everett has led the campaign on tackling rogue parking enforcement in the local area, including scams at the Ravensdale Car Park and has regularly worked closely with Giles to express his support the Parking (Code of Practice) Act, as it passed through Parliament over the last year.

Speaking about the Act, Giles said:

“I am pleased that this Bill has finally received Royal Assent, so we can deal directly with the rogue operators, like those at Ravensdale Car Park, who have previously run parking scams in our area. This will have real benefit for local residents, along with those who visit our Sunshine Coast, and I would like to thank Cllr Everett for all his hard work in pushing for this change.”