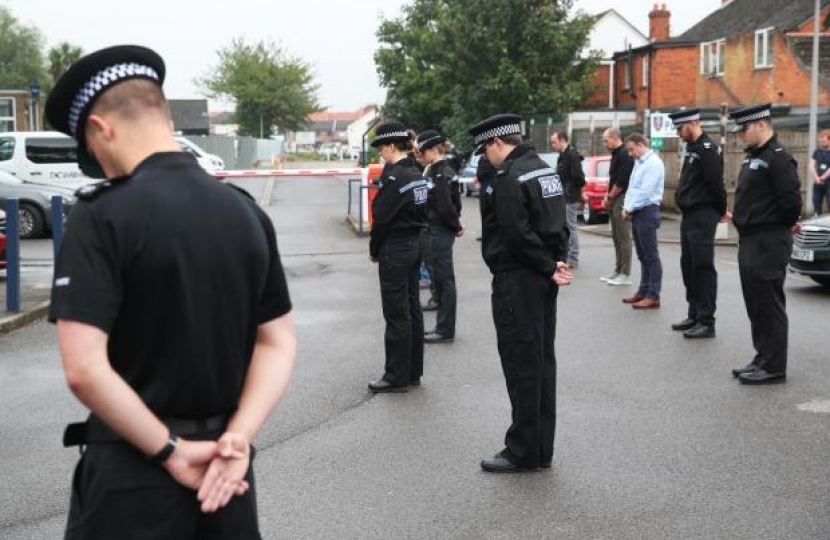 Giles Watling, MP for Clacton, has joined the campaign to introduce ‘Harper’s Law’.

Launched in memory of PC Andrew Harper by his widow Lissie, the new law would see criminals convicted of killing emergency service workers spend the rest of their lives in prison. The campaign has already been backed by the Police Federation of England and Wales (PFEW), which represents thousands of officers up to the rank of Chief Inspector.

Chief Constable of Essex Police, BJ Harrington, has also written to Giles to express his support for campaign, and to request that all Essex MPs push for this change. Following receipt of that letter, Giles has written to the Home Secretary, Rt Hon Priti Patel MP, to call for the introduction of ‘Harper’s Law’ and pledged to support the introduction of this change in Parliament.

“The death of any emergency service worker in the line of duty is a tragedy. But when that tragedy comes as a result of deliberate human action, the wider public rightly expect proper punishment. Yet many who I have spoken to about the case of PC Andrew Harper do not believe that those responsible have received an adequate sentence.

“Thankfully, such killings are rare, but violence against emergency service workers is common, with the CPS prosecuting 50 assaults per day. I do not believe that the gap between such violence and deliberate killing is not wide enough for us to be complacent on this issue, and, as Chief Constable Harrington reiterated in his letter to me, the introduction of ‘Harper’s Law’ will act as a sufficient deterrent to criminals, whilst ensuring that proper justice is done when tragedy strikes.

“That is why we need to bring in this law as soon as possible. To show my support, I have written to the Home Secretary to ask her to consider this change urgently. Our emergency service workers and the wider public are expectant of a proper response.”