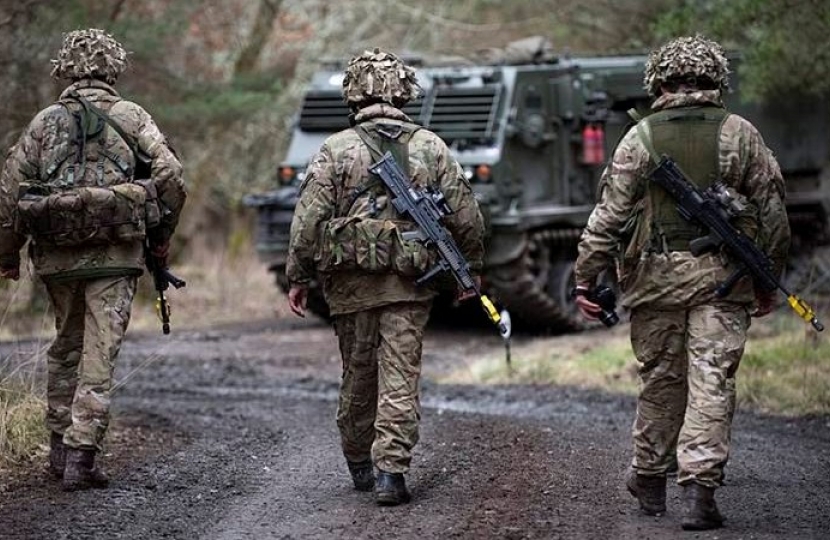 Giles Watling, MP for Clacton, has joined the campaign to end visa fees for Commonwealth personnel in our Armed Forces, who are applying for Indefinite Leave to Remain (ILR).

Giles was one of 133 signatories to a cross-party letter to the Home Secretary, Rt Hon Sajid Javid MP, which called on the Government to amend the annually set Immigration and Nationality (Fees) Regulations to exclude Commonwealth armed forces personnel and their dependents. You can read this letter below.

Current legislation exempts Commonwealth personnel from immigration controls during the period of their service, and upon discharge they are eligible to apply for ILR, providing they have served for a minimum of four years. However, the application costs for a single person ILR have increased 119% in the past five years to £2,389. This means that a service leaver wishing to settle with a spouse and two children would face a bill of almost £10,000 to continue living in the UK.

Giles, and his colleagues, believe that this is a very high cost for ex-service personnel, and it doesn’t reflect the respect in which all those prepared, if need be, to put their life on the line for our country, are held. The cost is also out of proportion to the actual costs to the taxpayer of the immigration work involved. The result is that currently many service leavers are forced to rely on financial support from charities such as the Royal British Legion, who provided £36,000 in grants for visa fees last year alone, or else face either leaving the UK or separating their family unit.

In terms of numbers involved, as of 1st October 2018 there were 4,710 regular and reserve Commonwealth citizens in active service and approximately 400 Commonwealth service leavers apply for Indefinite Leave to Remain each year. These numbers are likely to rise in forthcoming years due to the announced intention of HM Armed Forces to increase its intake of Commonwealth personnel to recruit 1,250 per year.

Speaking about the letter, Giles said:

“In business terms, the current revenue raised by these charges is modest – between £1 and 4 million a year – but the value in goodwill lost or part lost through this unjust charge is considerable. I know that it also irks many members of the public that our nation looks mean spirited to those who volunteered to join us, and it also puts a strain on resources for hard working charities like the Royal British Legion.

“That is why I back this visa fee exemption for ex-service personnel from the Commonwealth, and this change would also be in line with the spirit if not the letter of the Armed Forces Covenant, which dictates that all those who have served in the UK armed forces should be treated fairly.

“I also know, from my own engagement with them, that Armed Forces families support our Armed Forces Personnel through thick and thin, often making significant personal sacrifices to do so and their commitment to our nation should not be forgotten. Equally, no veteran who has served this country from a commonwealth nation should risk having their family split up due to not being able to afford these costs.”