GILES CELEBRATES NEXT GENERATION FILMMAKERS AT FILM THE HOUSE COMPETITION 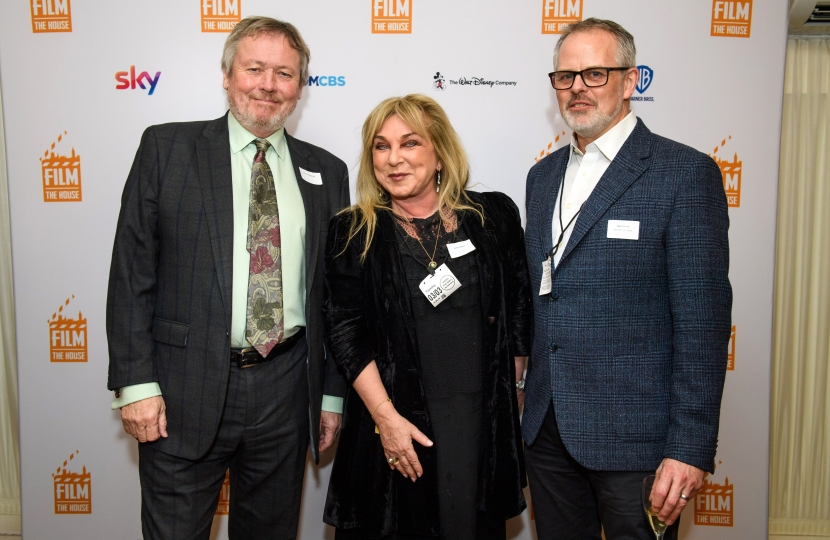 Giles Watling, MP for Clacton, was among those gathered to celebrate the British filmmakers of the future at an event in Parliament on Tuesday 3rd March. Writer, comedian and Absolutely Fabulous actor Helen Lederer hosted the Film the House awards ceremony, joined by film industry representatives, politicians and the finalists themselves.

Each year, young filmmakers and scriptwriters from across the country submit short films for the prestigious Film the House contest. This year, entries from more than 80 constituencies were shared with MPs across a range of categories including Best Script and Best Short Film, with prizes given to budding auteurs both under and over 16. The competition also saw the addition of the Directors UK award for Best Film Direction with under and over 16 categories.

This year, Freya Hannan-Mills won the Best Script Under 16 and Best Short Film Under 16 categories for her film Swallow which documents a daughter’s last days in a hospice with her mother. Judge Jane Lamacraft praised the film as ‘sensitive’ and ‘authentic’ and said that Hannan-Mills was ‘a young writer with an old soul’. Meanwhile, Morgan O’Connell took home the prize for Directors UK Best Film Direction Under 16 for ‘great framing and highly articulate use of the camera’ in Haven.

Other winning entries included Bertil Nilsson for Repair (Best Film Script Over 16), Souvid Datta for Gladiators on Wheels (Directors UK Best Film Direction Over 16), and Lanre Malaolu for The Circle (Best Short Film Over 16). winners took home Film the House trophies, cash prizes, a certificate of classification for their film from the British Board of Film Classification, as well as future mentoring sessions from industry screenwriting professionals and a screening of their film for friends and family.

“This year’s Film the House competition was an outstanding example of the up and coming filmmaking talent that we have across the UK. All of the entries were of an extremely high standard and it speaks to the importance of fostering younger talent in the creative industries.

“I’m sure that we’ll be seeing some of the finalists’ work in cinemas in the future.”

A spokesperson from Film the House said:

“Film the House was launched as a fun way to educate parliamentarians and young people about the importance of the creative industries to the UK economy and the many ways in which we can nurture and protect our creative industries. It is now one of Parliament’s largest competitions and is just one of a number of initiatives that is aimed at significantly raising awareness of the need to protect creativity and copyright by bringing together young filmmakers and parliamentarians.”

“It was a pleasure to be part of a competition that helps celebrate up-and-coming British film talent. Creative competitions like Film the House are an integral way for new creators to get involved in the industry while at the same time highlighting the importance of IP to MPs and creatives alike. Congratulations to the winners and shortlist of this year’s competition, we hope to see much more of you all in the future!”

“It was great to attend this prestigious event and view the work of the filmmakers of the future. The creative arts are an important area of focus for me and they already contribute so much to our economy. It is so good to see that the future of this crucial industry is in safe hands.”

Giles Watling, MP for Clacton, has written to the managers of grocery shops across the constituency. The text of his letter can be found below: