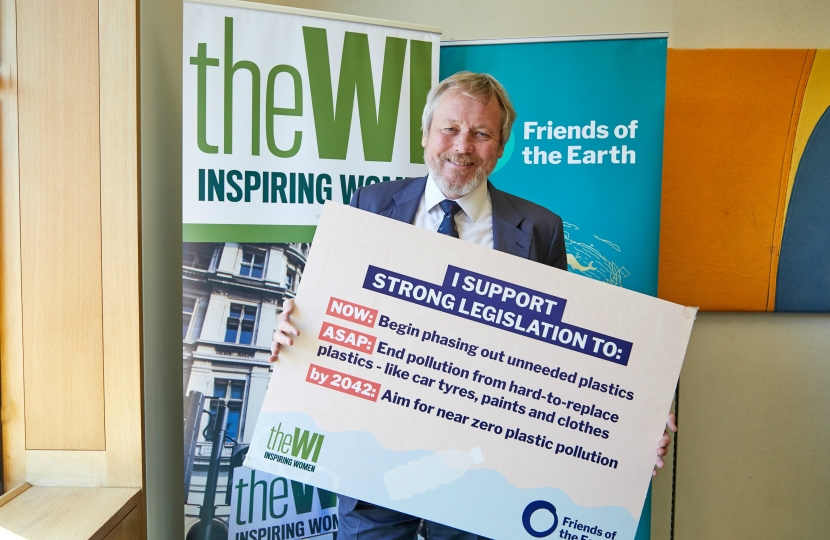 Giles Watling, MP for Clacton, has lent his support to a campaign by the National Federation of Women’s Institutes (NFWI) and Friends of the Earth to dramatically reduce plastic pollution and the amount of plastic we use.

As part of this campaign, Giles is supporting the Plastic Pollution Bill, a piece of legislation that seeks to phase out non-essential single use plastics by 2025 and prevent plastic pollution of the environment by 2042 as far as possible. To achieve this, the Bill sets out a schedule of action on all types of plastic for current and future governments, as this will ensure constant progression towards the end goal of dramatically reducing plastic waste and moving society towards pollution free alternatives. This Bill also goes further than the current government focus on marine plastic pollution, to include terrestrial and freshwater plastic pollution.

To see this piece of legislation adopted quickly, Giles has also signed a cross-party letter to the Environment Secretary, Rt Hon Michael Gove MP, which asked for the principles set out in the Plastic Pollution Bill to be included in the Environment Bill, so that it achieves the aspiration to ensure that this the first generation to leave the environment in a better state than that in which we found it.

“WI members have been taking action in their own communities to reduce their own use of plastic, and encourage others to the same but as individuals we can only do so much.

“The figures are shocking. Only 9% of all plastic waste has ever been recycled. And our research highlighted that by simply washing synthetic clothes this releases trillions of tiny plastic fibres every week. If we are to end the scourge of plastic pollution we need strategic action from government and we urge the government to take the opportunity to lead on this hugely important issue.”

“We’re delighted Giles is backing the call for a new law to tackle the plastic crisis. The public is crying out for tougher action, with nearly nine out of ten people backing new legislation to end non-essential single-use plastics by 2025. The government must listen to growing concerns and turn the tide of plastic waste that’s polluting our environment and harming our wildlife.”

“People in the Clacton constituency have told me they want urgent action to tackle the plastic waste that is blighting our environment and harming our wildlife. And as someone who has spent many hours picking up all kinds of rubbish from the Walton Backwaters, I have seen too much of the twelve million tonnes of plastic that ends up in the sea each year. So, we simply cannot wait any longer to take action. That’s why I am backing the Plastic Pollution Bill to stem the plastic tide and help preserve our environment for future generations.”