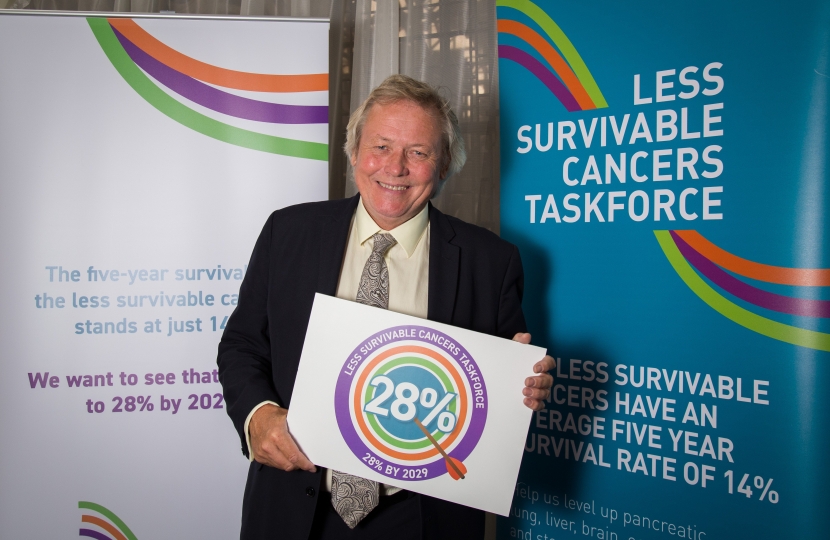 Giles Watling, MP for Clacton, is backing a new campaign that urges the government to adopt a new target: to double the survivability of patients who are diagnosed with either brain, liver, lung, oesophageal, pancreatic or stomach cancers. Currently the combined five-year survivability of these less survivable cancers stands at just 14%.

On Thursday 6th September, Giles attended a parliamentary drop-in event in the House of Commons, organised by the Less Survivable Cancers Taskforce (LSCT) - a charity coalition, where he learnt about the urgent need to increase survivability of these cancers to 28% by 2029. During this drop in, he met with a several cancer specialists as well as patients and nurses who have first-hand experience of these less survivable cancers.

At the event, Giles also discovered that annually 70,000 people are diagnosed with one of these less survivable cancers in England. If this five-year target is achieved by 2029, an extra 10,000 people a year would go on to live a longer life after diagnosis. As a result, they have pledged their support to urge the government and NHS England to adopt this target as part of a renewed 10-year NHS plan currently being prepared.

LSCT is made up of the following six charities: Action Against Heartburn, The Brain Tumour Charity, The British Liver Trust, Guts UK, Pancreatic Cancer UK and the Roy Castle Lung Cancer Foundation.

“I am happy to support the Taskforce’s proposed new target to double survival rates for the less survivable cancers, because everyone diagnosed with cancer deserves a chance.

“It’s also great to see so many charities uniting for such a good cause, and I’m looking forward to seeing the positive changes they make in the future.”

“Everyone with cancer deserves a fair chance of survival and we know that what gets measured gets done, so we are calling today for the government to adopt our target of doubling the five-year survival for these less survivable cancers to 28% by 2029. Action is needed to ensure these cancers are no longer left behind.”