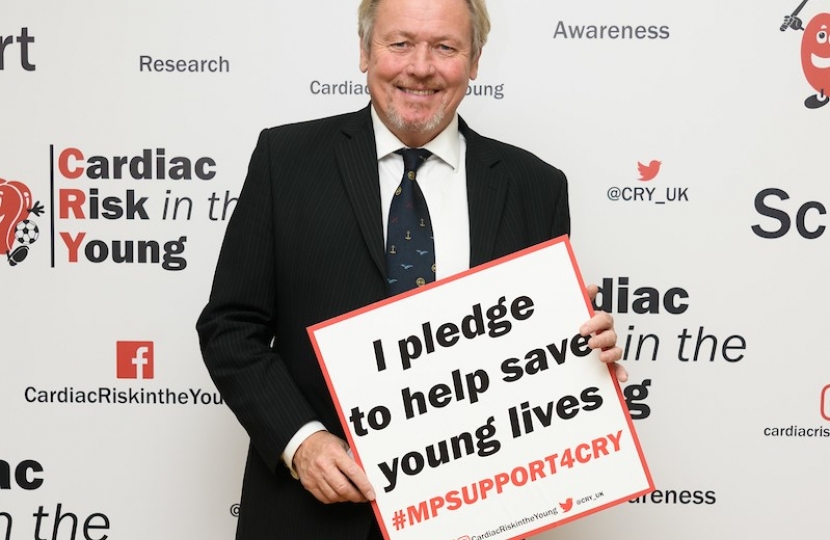 Giles Watling, MP for Clacton, recently joined the charity Cardiac Risk in the Young (CRY) at a Parliamentary reception to launch the results from their recent nationwide survey.

These results show, for the first time, that 82% of UK adults think the Government should be doing more to help prevent sudden cardiac death in young people. Similarly, 83% of adults questioned think all young people (aged 14 – 35) should be offered cardiac testing via a free, national screening programme. The survey also showed there appears to be a significant misunderstanding of the possible causes of sudden cardiac death with a staggering 40% of people (rising to 52% among 18 to 25-year olds) incorrectly believing that an unhealthy lifestyle could be a major cause of these tragedies. Finally, of the 18-34 age group questioned as part of the UK-wide survey, over two thirds (67%) of men and 71% of women said they would like “the opportunity to book in for cardiac screening (with an ECG) before reaching the age of 35”.

At the reception, on 21st November, all MPs were briefed on the survey results and advised of CRY’s ongoing campaign #MPsupport4CRY. This campaign asks MPs to pledge their support to establish a National Strategy for the Prevention of Young Sudden Cardiac Death in the UK.

Every week in the UK, at least 12 young (aged 35 and under) people die suddenly from a previously undiagnosed heart condition. In the vast majority of cases, the first sign of a problem will be the last sign and therefore the only way to detect a potentially fatal cardiac abnormality is through proactive cardiac screening by specially trained cardiologists.

CRY firmly believes that every young person should have the choice to be screened and currently offers a national screening service where anyone aged 14-35 can access free cardiac tests. As such, CRY’s expert teams currently test around 27,000 young people every year – with community screenings across the UK accessible in just 3 clicks at: www.testmyheart.org.uk

Also speaking at the Parliamentary Reception was inspiring teen campaigner, Abby Lang (18) who has singlehandedly encouraged a large number of MPs from all parties to pledge support to #MPsupport4CRY, including all 59 of Scotland’s MPs.

“I was delighted to attend CRY’s parliamentary reception and would like to congratulate the charity for the ongoing success of its #MPsupport4CRY. I was concerned by the survey results and will be working to address these issues in Parliament.”

“These new stats, reflecting public opinion, reinforce our campaign to make the Government sit up and acknowledge the massive impact young sudden cardiac deaths have on our society.

"It remains of huge concern to us that current UK policies are still contradictory, with guidelines based on incorrect assessments of the incidence, methods of diagnosis and positive management of cardiac conditions in young people. That’s why cross-party support for a new national strategy is so crucial, ensuring that the guidelines and policies to prevent young sudden cardiac death are consistent. And, the first stage of such a strategy must be to correctly acknowledge the incidence of these deaths.”