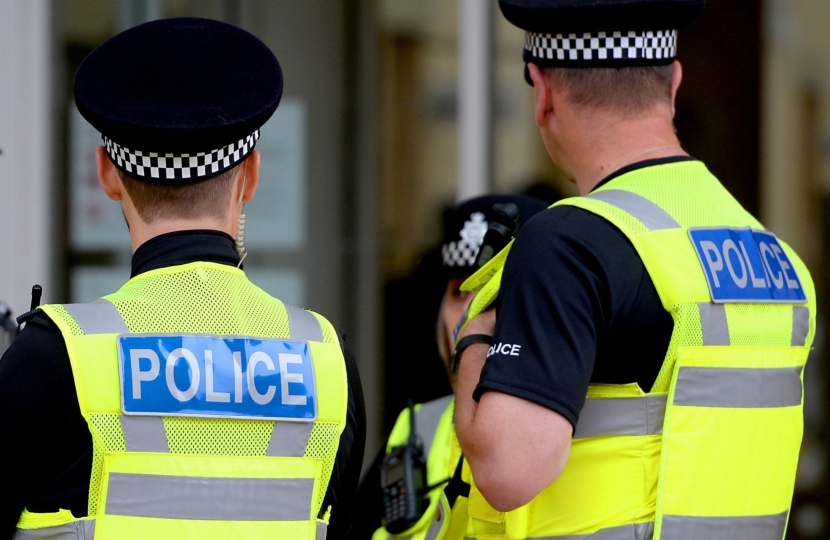 Giles Watling, MP for Clacton, has welcomed the announcement that Essex Police has been bolstered by an additional 101 officers.

These new officers are a consequence of the Government’s major police recruitment drive, which began over a year ago, and there are now 3,316 police officers across Essex, meaning that there are now more frontline officers on our streets to keep the public safe. This is also the highest number of officers active in the force since 2013, and significantly higher than before Giles’ election in 2017.

Since the launch of the Government’s recruitment campaign one year ago, a total of 6,620 extra officers have joined police forces across England and Wales. These statistics confirm that the Government remains on track to meet its manifesto commitment of recruiting 20,000 extra officers by 2023 and has hit the target of recruiting 6,000 new officers by March 2021 well ahead of schedule.

This recruitment drive is at the centre of the Government’s commitment to back the police with more resources, powers and support to keep the public and their communities safe.

Alongside the recruitment campaign, the Government has announced the second round of the Safer Streets Fund, backed by £20 million of new money, to crack down on neighbourhood crimes that blight our communities. This funding will enable PCC’s and Local Authorities to make crime cutting interventions in residential areas to ensure people feel safe in their communities.

Other steps to support frontline police officers include a £636 million funding boost for police forces this year, bringing the total for police funding up to £15.8 billion, boosting police pay by 2.5 per cent, equivalent to a constable receiving an extra £1,100, and enshrining a new police covenant into law, which will offer enhanced support and protection for frontline officers.

“Having previously led a campaign in Parliament to increase police funding, I am always pleased to see new officers join the force. I am also pleased that this national drive started here in Clacton. I was re-elected on a promise to get more officers onto the streets and to ensure our police have what they need to keep us safe. That is what we are doing, and those new officers are operating now in our area.

“Next year, Essex Police will also receive an additional £18.8m in its funding next year, thanks to the Government’s increase to police budgets. And I know that our local Police, Fire and Crime Commissioner will be looking to recruit additional officers over that next budget period.

“Every one of these officers will make an enormous difference in helping to cut crime and keep people safe – and I know that many more will follow as this Government continues to deliver on its promise to recruit 20,000 more over the next three years.

“By backing our police with the funding, powers and resources they need, we are keeping the public and our communities safe, so that people everywhere can live their lives free from the fear of crime and antisocial behaviour.”

“I am determined to make our streets safer, which is why I am delighted we have beaten our own target to recruit 6,000 additional police officers by March 2021.

“Many of these new officers are already on our streets helping to fight the coronavirus pandemic, and for that they get my huge thanks.

“These new officers, on top of further funding to tackle crimes such as burglary, robbery and vehicle crime will ensure the police have the powers, tools and resources they need to cut crime and make you feel safer in your community.”

The Government's actions to support the police include:

The Government are also supporting our police through coronavirus by:

Giles Watling, MP for Clacton, has questioned the Prime Minister on beer duty differentiation and support for pubs. This took place during Prime Minister's Questions on 24th February 2021, the transcript of which is below: