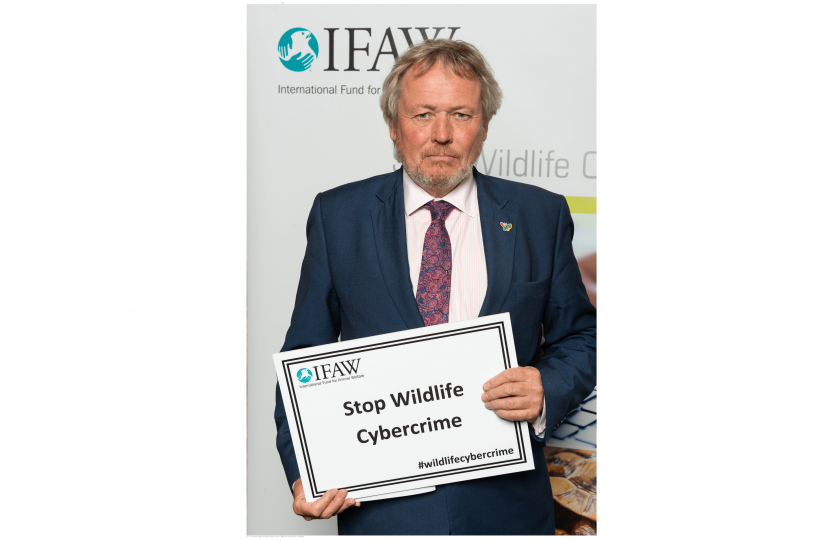 Giles Watling, MP for Clacton, is lending his support to calls for an end to online trade in live wildlife and their parts, which is driving endangered species further towards extinction.

A new report from the International Fund for Animal Welfare (IFAW), ‘Disrupt: Wildlife Cybercrime – Uncovering the scale of online wildlife trade’, highlights the vast quantity of live animals and their body parts available for sale online and the threat this poses to the future survival of many species.

Over a six-week period in 2017, with a focus on France, Germany, Russia and the United Kingdom, IFAW’s team of experts and researchers discovered that thousands of live, endangered and threatened animals as well as animal products were being offered for sale online. IFAW identified 5,381 advertisements spread across 106 online marketplaces and social media platforms, cataloguing 11,772 endangered and threatened specimens worth £3,044,974.

In the UK alone, IFAW found 1,194 posts advertising 2,456 wildlife specimens across 35 online marketplaces and three social media platforms, with a value of £741,676. More than three quarters of specimens offered for sale were live animals. Turtles and tortoises were the most common specimens offered for sale in the UK and researchers also identified a large number of birds and owls for sale, including African grey parrots.

The report also reveals that the online trade in ivory or suspected ivory remains a persistent problem, with almost one-fifth of the advertisements found offering ivory or suspected ivory products. Additionally, live animals made up the overwhelming majority (80%) of specimens, demonstrating the popularity of owning exotic animals such as tortoises, parrots, owls, primates and even big cats as pets. Reptiles, particularly live tortoises and turtles, were by far the most prevalent, representing 45% of wildlife specimens identified in the report. Almost a quarter of the remaining specimens were birds, including endangered African grey parrots. Specimens from other mammals including cats, primates, bears and rhinos were also identified.

The Government has now brought forward the Ivory Bill, which will introduce of the toughest bans on ivory sales in the world, and Giles will continue to work with the Government to crack down on the illegal wildlife trade, to ensure endangered species are protected for future generations.

“We all have a part to play in protecting our most threatened wildlife, whether as consumers, politicians or those involved in running the online marketplaces where so much of this trade in live animals and animal products takes place. IFAW remains as committed as ever to fighting the scourge of wildlife cybercrime and we will continue to bring together key players to do so. Our investigation shows ivory is still a major component of online wildlife trade and so it is vital that the UK ivory ban Bill, now introduced to Parliament, progresses swiftly into legislation.”

“I am very pleased to support IFAW’s work to stop wildlife cybercrime. As so many of our most endangered species are at a tipping point, it is incredibly important to draw attention to this issue. Going forward, we must all do what we can to stop this trade and protect our wildlife.”